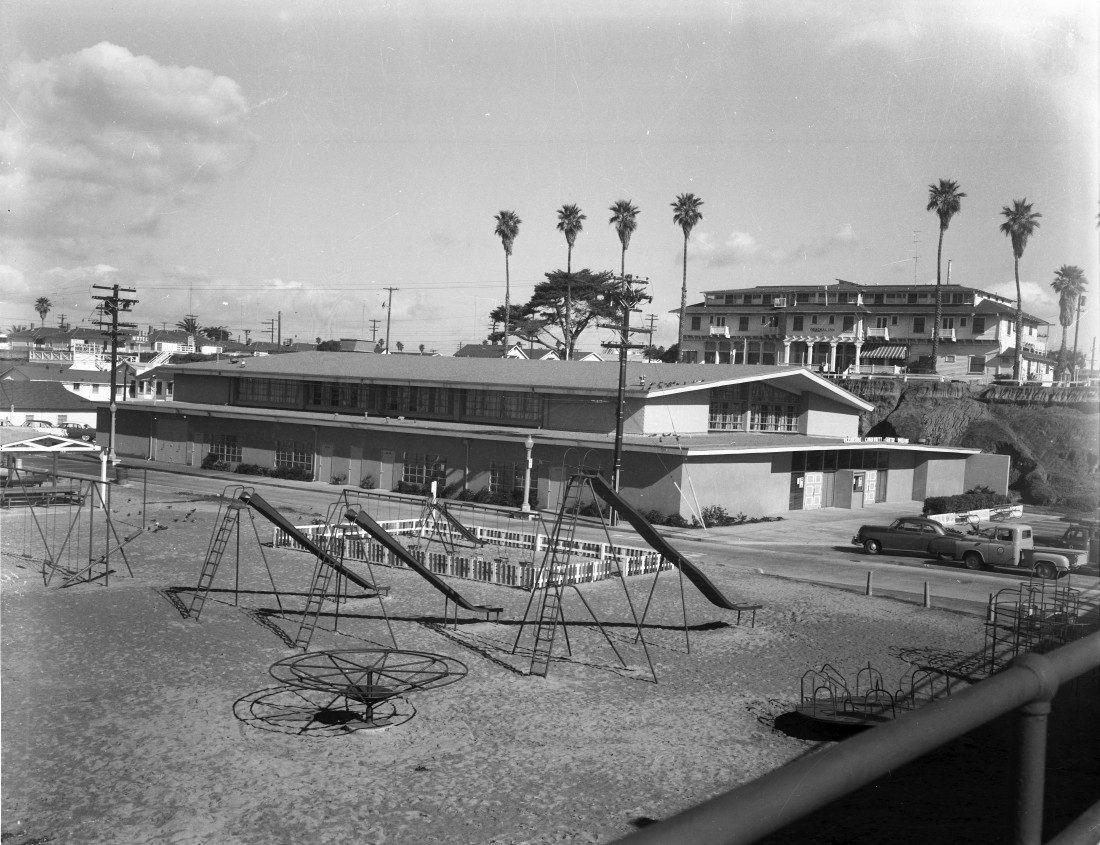 The Oceanside Beach Community Center is showing its age. At 65 years old it has weathered the elements, including the relentless salt air. Once the center of activity ranging from sports, to Marine Corps Balls, and even its use as the City’s first “senior center,” the building may seem like a doomed dinosaur to many. Some may feel it has lost its purpose, but if the walls could talk the memories would resonate with history.

The land on which the Community Center now stands was once occupied by an electrical plant and salt water plunge, built in 1904, located just north of the Oceanside Pier. By the mid-1930s, the plant and plunge were removed and replaced by an “amusement zone” and concession booths. In 1942 the City of Oceanside leased the property to Harold Long, owner of the Oceanside Amusement Center. He set up a series of carnival rides including a large Ferris wheel for several summers. Long’s amusement center included concession stands, games of skill, and novelty items, such as Harold Davis’ “House of Relics”.

In 1946 a building was erected in the center of the “midway” of the amusement center to accommodate the game of Bridgo. Bridgo Parlors were popular during World War II, but the game was deemed to be a form of gambling and soon closed by the State of California.

The amusement center was removed by the early 1950s and the Oceanside City Council considered plans for a new Community Center to be built in its place.  In 1955 the City Council requested bids for a community center, but the move was not without controversy as many viewed a public swimming pool as more important to the community. (Two community swimming pools, at Brooks and Marshall Streets, were built just a few years later.)

Architect George Lykos drew the plans for the building.  Lykos had received a Bachelor’s of Architecture in 1935 and his Masters the following year from MIT.  In 1942 he partnered with Sidney I. Goldhammer and established the firm Lykos & Goldhammer.  Their office was located at the Sprekels building in downtown San Diego.  Among his works are the County Law Library, the San Diego Courthouse, the First Unitarian Universalist Church in Hillcrest, the Ocean Beach Pier, Ryan Aeronautics and Waggenheim Middle School in Mira Mesa. The building contract was awarded to the firm of A. E. Betraun Co. in Vista, the firm also responsible for building the Star Theater in 1956.

Groundbreaking ceremonies being held March 18, 1955. Construction began in April and it was hoped that the project would be completed as early as June of that year.  However, there were delays caused by labor strikes and a shortage of materials.

The Oceanside Beach Community Center was formally dedicated in September of 1955 and built at a cost of $131,000.  One of the first events to be held at the new Center was the Marine Corps Ball in November of that year.

Entertainment, such as performances by the San Diego County Symphony Orchestra, took place at the new Center. Parks and Recreation Superintendent J. G. Renaud booked a variety of entertainment acts to perform at Oceanside’s new Community Center to the delight of residents.

In 1956 recording artist Ernie Freeman and his band performed at the Center.  Freeman played on numerous early rock and R&B labels in the 1950s and played piano on the Platters’ hit “The Great Pretender”. He made the Top Ten of the R&B charts with the single “Jivin’ Around”.

Local Swing dancers were thrilled when jazz musician Earl Bostic also performed at the Beach Community Center. Bostic, considered a pioneer of the “post-war American rhythm and blues style”, had a number of hits such as “Flamingo”, “Temptation”, “Sleep” and many more. A tenor saxophonist, Bostic was known for his “characteristic growl” he made on the sax.

Joe Graydon, who had a televised variety show, first in Los Angeles and then San Diego, hosted a show at the new Community Center. Renaud’s first rate entertainment continued with a “Western Roundup” and country western acts such as Hank Penny, Sue Thompson and Eddie Miller. Les Brown and his orchestra, who had performed with Bob Hope during USO tours, also entertained at Oceanside. The Community Center also presented movies, such as 1959’s now classic “Surf Safari” by John Severson. Admission was $1.25 for adults and 50 cents for children.

In 1958 Boxing World Heavyweight Champion Floyd Patterson trained for a prize fight using the Oceanside Community Center and entertained spectators with several sparring rounds. He was accompanied by his legendary manager, Cus D’Amato.

One of the biggest acts in Country Music came to the Community Center in 1961. Legendary Johnny Cash, along with the Maddox Bros. and Rose, performed for fans who flocked to see the “Man in Black.”

By 1985, plans were underway to rebuild the pier and redevelop the beach area.  Along with a “facelift” the Community Center was enhanced by the addition of several large concrete and stone pillars. Sets of three pillars forming triangles were placed on the front entrance (east façade) and on the west façade along the Strand.  The pillars were then topped with large wooden beams, creating a more modernized look.  These pillars and beams have been removed in recent years, returning the Center’s original facade.

In 1992 Marine-life artist John Jennings began work on a 45 foot ocean mural on the north elevation of the community center. Jennings donated his time and materials, estimated at over $35,000 as a gift to Oceanside.

The building now sits silently on The Strand, awaiting its doors to be reopened and for renewed activity and sounds to reverberate through its rafters.