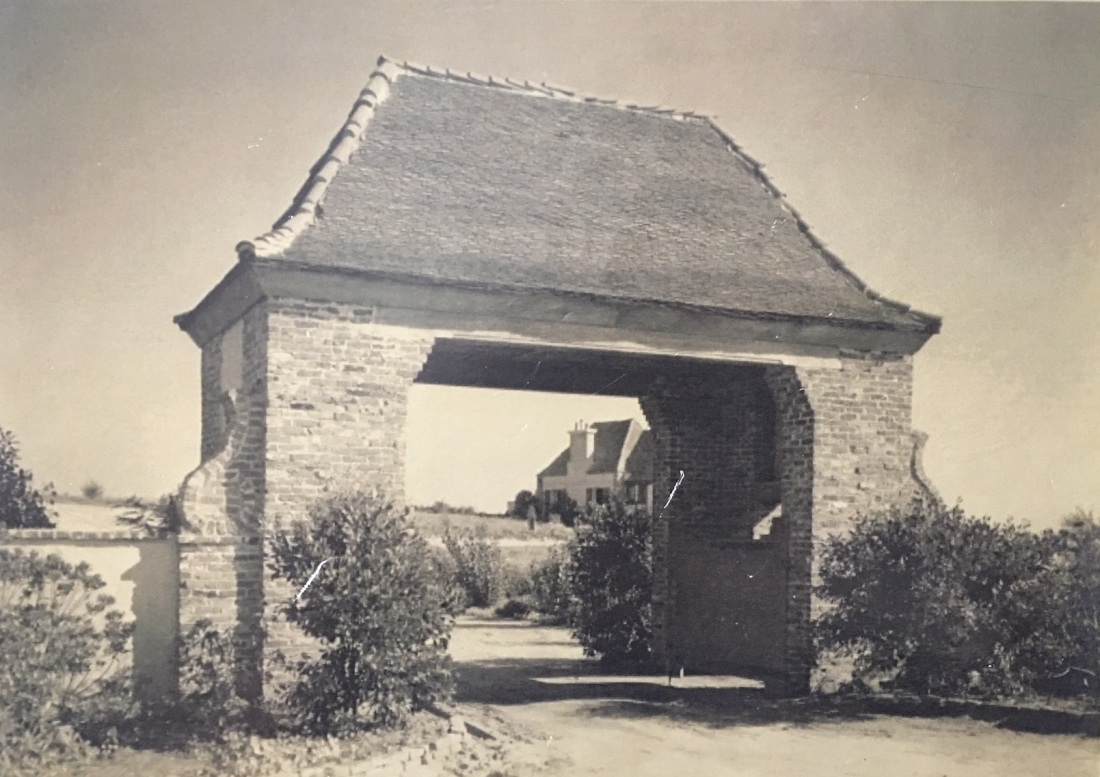 Over several decades many residents and visitors alike have often wondered who lived beyond the gate at the end of Oceanside’s South Pacific Street. An impressive entrance allowed but a sneak peek into beautiful homes with unique architectural features.

Kenyon A. Keith, a wealthy resident of Pasadena, purchased 28 acres of oceanfront property in 1928. The following year he began developing a colony with custom built homes that were designed to resemble a French fishing village, St. Malo.  Residency was by invitation only and limited to family and hand selected friends.

The St. Malo Subdivision begins at Eaton and South Pacific Streets. However, the St. Malo community, also extends on either side of the 2000 block of South Pacific Street. As homes were constructed, and continue to be built, they are kept to a strict standard of architectural style and materials, built and weathered to appear as if they have been there for decades.

The entry way or St. Malo Gate, was designed by architect William McCay. Keith wanted an imposing entrance to the St. Malo Beach community and built it to represent “a sense of place.”

St. Malo homes weren’t just weekend hideaways for the wealthy, wanting to escape from the city, they often “summered” there. Owners brought a full staff, with maids and cooks as most homes were built with “servants’ quarters.”

Homes were fondly described by owners as “story book cottages” or “chalets.”  Nicknamed “Pasadena on the Rocks”, St. Malo offered a private beach, playground, 3 tennis courts, a volleyball court and a clubhouse cabana.  Activities included exclusive cocktail parties, barbeques and trips to the Delmar Races.  Close friends of the owners were allowed to rent or even borrow houses for social gatherings and vacations.

Although Oceanside residents were not likely privy to the comings and goings of colonists, their activities were posted in the society pages of the Los Angeles Times that featured headlines such as:  “St. Malo is Favorite for Pasadena Folk”; “St. Malo Beckons Social Set”; “St. Malo Beach Hums with Activity.” The social columnists promoted the exclusivity of St. Malo, but provided the names of the socialites and families that were staying there, along with their activities and other gossip.  They boasted that St. Malo parties were better than any in Hollywood.

While newspaper articles attributed the location of St. Malo as in or near Oceanside, some attempted to place the community nearer tonier locales such La Jolla or Delmar. However, in 1950 the City of Oceanside annexed the St. Malo subdivision, at the owners’ request, which at the time had grown to 24 homes.

The heyday of St. Malo was from the 1930s and 1960s.  Owners included Desaix Myers, a mining engineer; Dr. John Dunlop, pioneer orthopedic surgeon; Karl G. Von Platen, lumber magnate; Attorney Steve Halsted; Lamar Trotti, writer and film producer; W. John Kenney, Asst. Secretary of Navy; Frank Butler, screenwriter; songwriter Nacio Herb Brown; Hugh Darling, mayor of Beverly Hills; painter Marge Wilman.  Another wealthy “colonist” was Alice Pillsbury Forsman, daughter of the co-founder of the Pillsbury Mills.  St. Malo was such a way of life for most, even when they passed away their obituaries mentioned their affection of their St. Malo home away from home.

Other notable residents were film director Jason S. Joy and author Ben Hecht.  Joy’s St. Malo home was referred to as “La Garde Joyeuse” and included an outdoor bowling alley and volleyball court.  Hecht, whose prolific works include “Scarface”, purchased his St. Malo home in 1950. While living in Oceanside, he wrote a children’s book about a cat who roamed the streets of Oceanside. He said in an interview that he often wrote from his den overlooking the Pacific Ocean.

Homes within the colony sold for $57,000 (and up) in the 1940s, however, ownership was contingent upon “membership” and the approval of Kenyon Keith.

Over the years visitors have included Harpo Marx and James Maytag, (Maytag appliances). The most famous and royal visitors were none other than England’s Prince Phillip and Princess Anne, who stayed at St. Malo while attending events during the Los Angeles Olympics in 1984.

No longer quite as exclusive, new families mingle with the more “established” residents. While St. Malo is no longer a secret, it still remains private and the homes behind the gated entrance and those who live there, still evoke a bit of mystery.