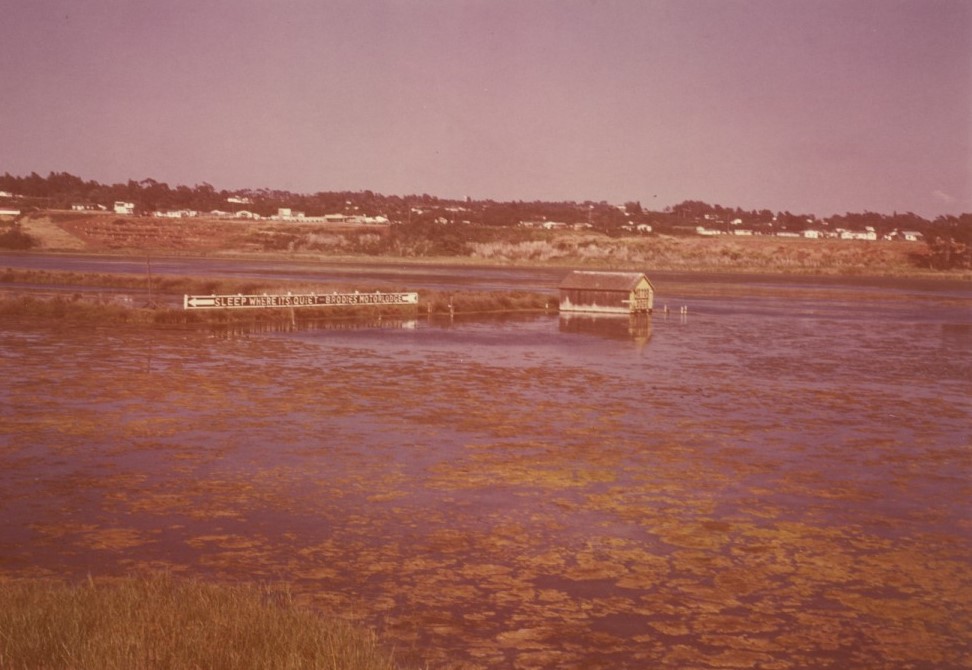 An old boathouse slowly collapsed into the waters of the Buena Vista Lagoon in the 1970s, sliding into a watery grave. Many longtime residents remember this old boathouse but few may remember its history.

The Buena Vista Lagoon, once a slough, has a murky history much like its waters. Sloughs are “ecologically important as they are a part of an endangered environment; wetlands. They act as a buffer from land to sea and act as an active part of the estuary system where freshwater flows from creeks and runoff from the land mix with salty ocean water transported by tides.” (Wikipedia)

At times large areas of the slough were completely dry. In 1910 and 1911 residents from both Carlsbad and Oceanside gathered to race horses on a half mile track on the dried “lake bed.” In the mid 1920s the dried bed of the eastern end of the slough was considered for a landing field for planes. Of course, these activities were temporary because during heavy rains the slough would fill, sometimes past its natural capacity, and spill out over the Coast Road and into the Pacific Ocean.

In 1939 the County ended any hunting at the lagoon, although fishing was allowed. The area was declared a bird sanctuary eventually named after Bombardier Maxton Brown of Carlsbad, who was killed during World War II in action in North Africa.

Shortly afterward, a weir was built at the mouth of Buena Vista lagoon. A weir is a barrier used to control the flow of water for outlets of lakes, ponds, and reservoirs. Once in place, the weir changed the natural tidal flow of the slough, transforming it into a “freshwater brackish lagoon”.

Before the lagoon was altered in such a dramatic way, in 1901 the California Salt Company attempted to harvest salt from man-made evaporation ponds on the north end of the Buena Vista Lagoon. These ponds are shallow basins designed to “extract salt from seawater, salty lakes, or mineral-rich springs through natural evaporation.” As the water dries, the salt crystals are harvested by raking.

The July 13, 1901 edition of the Oceanside Blade reported: “The forces of the California Salt Co. are still at work in the slough between South Oceanside and Carlsbad. They are preparing to put down wells in the slough bed where points will be put in. The entire system will be connected to a pump and the brine pumped into the vats. Pumping operations are expected to commence in a few days.”

The endeavor failed, however, and in a few short years the Salt Company had left town, leaving the evaporation ponds intact which were visible for decades. Because of this some have assumed that the boathouse dated back to the Salt Company.

The boathouse was then utilized by hotel owner Dr. Clifford Elwood Brodie.

Brodie, a chiropractor, was a native of Washington State. He moved to Oceanside in 1939 and was actively involved in both business and politics. He built his first hotel, the Brodie-O-Tel at 2001 South Hill (Coast Highway) in 1939. Described as “colorful”, Brodie was married no less than five times (one marriage lasting just two months after securing a quickie divorce from a previous wife in Reno). He served on the City Council, but was the subject of a recall in 1945 because in part of his “bickering” with other council members.

After opening a twelve-room motor lodge overlooking the Buena Vista Lagoon, Brodie an avid sportsman, sought to have the lagoon transformed into a recreational spot for boaters and fishermen. He housed a boat of his own in the boathouse which was accessible from his property by way of the salt ponds.

He advertised his hotel, Brodie’s Motor Lodge, on signage and newspaper ads that said, “Sleep Where It’s Quiet.” His boathouse was painted with the words “Motor Lodge”.

The hotel was put into “receivership” for a time during a hotly contested divorce in 1949 and during that time it was reported that the boat kept at the boathouse was stolen. It very well could have been Brodie himself who took the boat in order to keep his wife Florence from having it. Brodie was found in contempt by the courts, after locking the hotel and leaving with both funds and records (and perhaps the boat).

In 1950 Brodie attempted to sell his hotel at the lagoon, advertising it as a Mexican style hotel with a full length porch, panoramic views and sea breezes.

Despite his earlier recall, Brodie ventured into the political arena, running for county supervisor and later for an open council seat in 1952, but was not successful. He was, however, successful in renewing a relationship with one of his former wives, Edith Wolfe, and they remarried.

Clifford E. Brodie died in November 1953 after suffering a fatal heart attack. The lodge which bore his name continued operation.

In fact, in 1958 a very special guest checked into the Brodie Motor Lodge. Heavyweight Boxing Champion Floyd Patterson arrived in Oceanside in July of that year along with his manager Cus D’Amato. Patterson was training for his title defense against Roy Harris in a match held at Wrigley Field in Los Angeles, on August 18th. His training took place at the Beach Community Center, but he stayed “where it’s quiet” at the Motor Lodge overlooking the lagoon.

After his training camp ended Patterson published a personal note in the Oceanside Blade Tribune saying in part: “I’m certainly going to miss Oceanside.  I know when I get back to New York I’ll be thinking of this place.  I also know that wherever I go to train for my next fight, I’ll be remembering the fine time, the perfect climate and the wonderful people of Oceanside.”

By the mid 1960s the Brodie Motor Lodge was torn down but the boathouse remained on the lagoon. Eventually the paint faded and the wooden structure began to deteriorate. It began to sink, even while children and teenagers ventured in and around it, One of the last published photos of the boathouse was in 1978, with a young boy perched precariously on top of it to fish.

Eventually Brodie’s boathouse slipped under the waters of the Buena Vista Lagoon and while it may be lost to the elements forever, the boathouse lives on in the memories of many.

Thank you to Edith Wolfe-Badillo for sharing some of these wonderful photos with the Oceanside Historical Society.