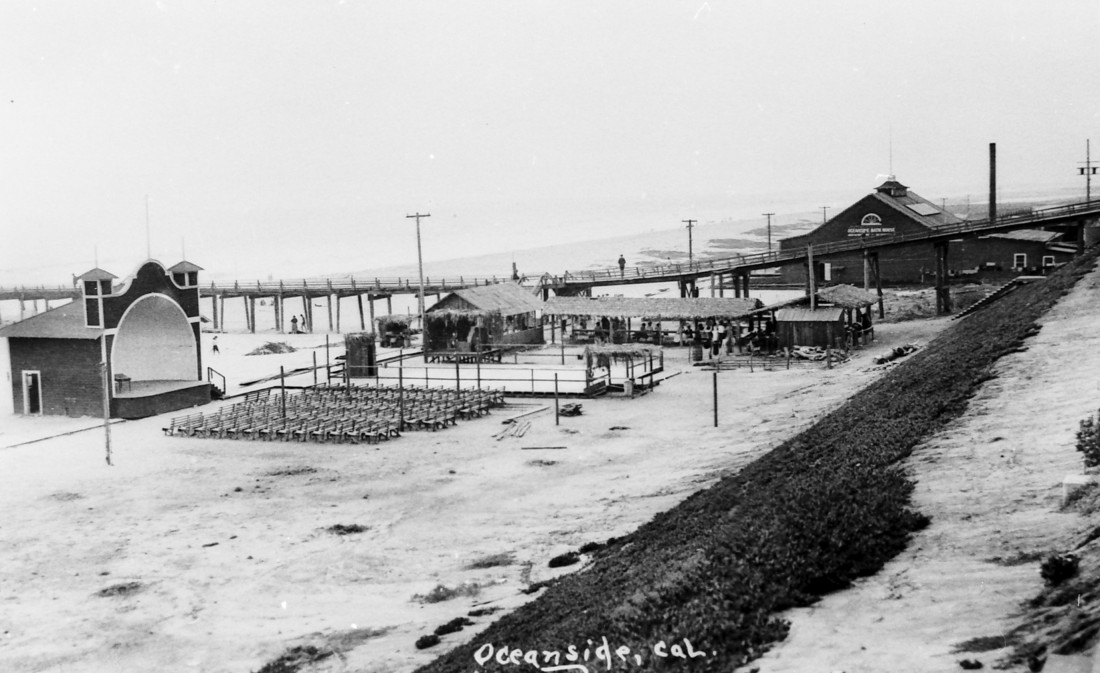 Oceanside’s oceanfront bandshell and beach stadium are unique to San Diego County. Throughout Southern California there are no other similar beachside facilities like it. The Junior Seau Pier Amphitheater provides a one-of-a-kind venue and it has become an integral part of the City’s recreational and cultural amenities.

Just over 100 years ago, plans for a “band stand” on the beach south of the pier were presented to the City Council.  The band stand would “be covered over and a regulation shell formed at the back, ceiled with matched lumber so as to constitute a sounding board or a reflector as an aid when the stand is used for music or public speaking.” Local building contractor Frederick W. Rieke was awarded the contract to build a 24×26 structure in a “Mission style” with cupula and the structure was completed in the Summer of 1919.

After its completion, it quickly became the focal point for activity and was used for concerts and events. (The beach band stand would later became known and referred to as a bandshell, due to its shape.)

On July 4, 1927, Oceanside celebrated its 4th pier. The three day celebration brought thousands of people, triple that of the City’s population. Several improvements were added to enhance the area surrounding the pier: The Strand was paved from Wisconsin to Ninth Street (Neptune Way); a dancing pavilion placed under the pier approach and other amenities including a small cafe built just south of the pier.

To modernize the look of the bandshell, (which was just 8 years old) the cupula was removed. The June 16, 1927  Oceanside Blade newspaper reported:  The remodeling of the band stand with the enlarging of the front platform and the cutting off of a portion of the high top to remove some of the Queen Anne effect and modernize it is being done this week.

The bandshell was resituated at an angle facing a northeast position. Rows of wooden benches were built to accommodate those attending beach concerts or other festivities held at the bandshell, just below the bluff at Pacific Street. While convenient and necessary, the benches were not enough to seat the hundreds of spectators events would attract and many were left to stand.

In 1936, as part of a Works Project Administration (WPA) project, the inadequate seating on the bluff was replaced a beach stadium. The Oceanside News newspaper reported:  Preliminary work was started Monday on a new city project under WPA auspices, the stadium to be constructed on the face of the bank to the south of the pier and overlooking the broad recreation space and band shell. A crew of 14 men now is engaged in clearing off grass and other growth in readiness for construction of a rubble wall, the first stage of the cement stand. Fragments of old concrete will be used in this phase of the building. J.C. Rouse and C.O. Rowe are in charge of the new project, the former for the WPA and the latter for the city.  Both officiated in similar capacities on the new water line and building works. The stadium will provide seating for around 800 persons and greatly improve the facilities and appearance of the section adjoining the pier. The government has allocated $5200 with which to pay the cost of labor and also as a share of the cost of the constructed materials.

In June of 1937 the Oceanside newspaper reported that the stadium seating would accommodate around 2,000 persons.  However, the following day that San Diego Union estimated that nearly 3,000 persons jammed the stadium when it was formally dedicated as part of the Southern California Beauty Contest.

After nearly two decades of service, Oceanside’s first bandshell was dismantled in 1948 due to termite infestation.  For two years a temporary stage was built to accommodate the annual Beach Opening and beauty contests.

While beauty contests were held at the bandshell in the 1920s, the Miss Southern California Beauty Contest officially began in 1931. It grew in popularity each year and drew thousands of people all over San Diego County and contestants from all of Southern California.  Initially the female contestants were sponsored by local merchants.  By the 1940s the contest became very popular with starlets looking to be discovered by movie studios.

In 1947 the Oceanside Chamber of Commerce announced that movie scouts from three major motion picture studios would be in the audience. “Girls parading across the flower decked ramp will be judged not only on their beauty, but for poise and personality, by the movie star makers.  The girls selected as possible movie material will not necessarily be contest winners, and it is understood that the judges’ decisions will have no bearing on selections made for screen tests.”

According to Lil Jackson, who was a freelance writer for the local paper, this was actually a “planted” story.  Her husband, Louis Jackson, was chairman of the Beauty Contest for the Chamber of Commerce and was having difficulty in getting “quality girls” to enter the contest and getting them sponsored by merchants.  Lil came up with the idea to write the column indicating that Hollywood movie scouts would be at the event in the hopes to draw more girls and sponsors.  One particular year the ploy worked even better than hoped.  It just so happened that a movie starring John Wayne was being filmed at Camp Pendleton, “Sands of Iwo Jima”.  Many of the cast were staying at the Carlsbad Hotel and agreed to be judges and made this competition one of Oceanside’s most successful and publicized beauty contests.

In 1956, a star was born – or at least made her debut on the Oceanside’s beach stage. Raquel Tejada was the second of three finalists of the famed beauty contest. She would go on to win the title of Miss Fairest of the Fair at the San Diego County Fair.  Later she changed her name and became an actress and 1960s sex symbol Raquel Welch.

After two years without a proper event venue, in April of 1950 bids were opened for the construction of a new beach bandshell. City planners recommended that the bandshell be “relocated directly in front of the beach bleachers and adjoining the Strand.” Plans were drawn by prominent San Diego architect Sam W. Hamill, who also designed several Oceanside schools buildings.  Original plans were to include “a Mission flavor, carried out by tile roof and stucco exterior.” However, the April bids were considered too high and Hamill was asked to revise his plans, eliminating the tile roofing.

The local newspaper described Hamill’s design: The shell is to be 58 feet wide and 19 feet deep on the outside, with the concrete stage extending an additional seven feet beyond the face of the overhead structure.  There will be steps in front of the stage on both sides, leading up to the platform, and doors to both the back and wings of the stage. Dressing rooms for men and women, complete sanitary facilities, will be included in the backstage portion of the shell, facilitating theater productions, and provisions will be made for the possible installation of curtains along the front of the stage.  Storage room backstage will accommodate stage furnishings, props and other equipment for various types of spectacles.

Richardson Brothers constructed the bandshell which was completed in June 1950 for the annual Oceanside Beach Celebration.  Saunders Construction Company laid the large 14,000 square concrete slab to be used particularly for square dancing which was popular at the time. The concrete “mat” as it was referred to, was also used for roller skating, volley ball games and shuffleboard.

In 1953 the band shell and “bleachers” received renovations.  The inside of the bandshell was painted a light blue, while the backs of the bleacher seats and fencing behind it, a light green. It was common to decorate the bandshell with gladiolas and palm fronds for beauty contests and beach opening celebrations.

During the Vietnam War the bandshell and stadium were used for demonstrations. Black Panther Angela Davis was a speaker at one such protest, drawing thousands.

In the 1980s concerts were revived and the bandshell hosted notable entertainers including jazz legend Lionel Hampton and Oceanside’s own Barbara Mandrell.  To accommodate such events, risers and wooden platforms were used to hold or provide space for needed equipment such as lighting, speakers and cameras.

In 1991 the bandshell stage was temporarily enlarged to accommodate a military event: “Welcome Home the Troops” parade and celebration.  Many servicemen and women were returning from the Middle East having been deployed for Operation Desert Storm.  The Fieldstone Corporation along with Orco Block Company and U.S. Silica donated materials for the extension. The stage was extended 12 feet out and 70 feet across.

Oceanside’s iconic bandshell was featured in a movie “Bring It On” filmed in 2000 starring Kierstin Dunst and Gabrielle Union, and can also be spotted in episodes of the current television show “Animal Kingdom”.

On May 16, 2012, the Oceanside City Council voted to rename the Oceanside Pier Amphitheater, as well as the beach community center, in honor of Junior Seau. A native of Oceanside, Seau graduated from Oceanside High School and went on to play professional football in the NFL for the San Diego Chargers and was a beloved local citizen.

The Oceanside bandshell is an historic and cherished landmark, still in use for a variety of community events including cultural celebrations, religious services, outdoor movies and concerts.